What is ER Diagram

Advertisements
What is DFD Requirment Phase in SDLC

What is ER Diagram

An entity relationship diagram (ERD) shows the relationships of entity sets stored in a database. An entity in this context is an object, a component of data. An entity set is a collection of similar entities. These entities can have attributes that define its properties.

A model that represents system data by entity and relationship sets is called E-R (Entity-Relationship) diagram. It is a detailed logical representation of the data for an organization. The entity-relationship (E-R) diagram is based on a perception of a real world which consists of a set of basic objects.

The ERD is graphical data modeling tool. It is based on a perception of a real worker that consists of a collection of basic objects , called entities , and of relation among these objects. While DFD captures the data and its relationship.

Entities: An entity is a person, place, thing or event of interest to the organization and about which data are captured, stored or processed. For example, an employee is an entity.

Relationship: An association of several entities in an entity-relationship diagram is called relationship. There are three types of relationship exist among entities. These are:

Attributes: Each entity type has a set of attributes associates with it. An attribute is a property of characteristics of an entity that is of interest to the organization. I use an initial Capital Letters, followed by Lowercase Letters in naming an attribute. If an entity is something about which I want to store data, then I need to identify what specific pieces of data I want to store about each instance of a given entity. I call these pieces as data attributes.

ERD is built up by the following components

The attribute which uniquely identifies each entity in the entity set is called key attribute.For example, Roll_No will be unique for each student. In ER diagram, key attribute is represented by an oval with underlying lines.

An ER diagram is a means of visualizing how the information a system produces is related. There are five main components of an ERD:

Entities, which are represented by rectangles. An entity is an object or concept about which you want to store information.

A weak entity is an entity that must defined by a foreign key relationship with another entity as it cannot be uniquely identified by its own attributes alone.

Actions, which are represented by diamond shapes, show how two entities share information in the database.

Connecting lines, solid lines that connect attributes to show the relationships of entities in the diagram. 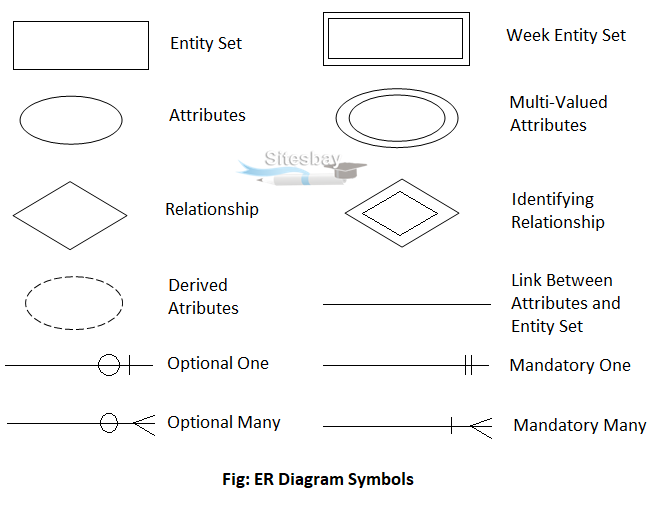 In our ER diagrams, we will use the convention that entity type and relationship type names are uppercase letters, attribute names have their initial letter capitalized, and role names are lowercase letters.