Header files contain definitions of Functions and Variables, which is imported or used into any C++ program by using the pre-processor #include statement. Header file have an extension ".h" which contains C++ function declaration and macro definition. 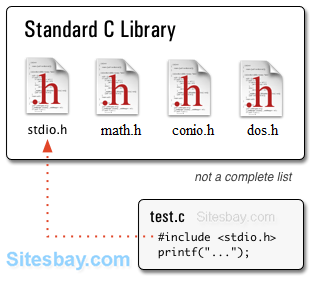 Types of Header Files in C++

Why need of header files

See another simple example why use header files

In above program print message on scree hello world! by using cout but we don't define cout here actually already cout has been declared in a header file called iostream.

How to use header file in Program

Both user and system header files are include using the pre-processing directive #include. It has following two forms:

This form is used for system header files. It searches for a file named file in a standard list of system directives.

This form used for header files of our own program. It searches for a file named file in the directive containing the current file.