In Java, keywords are the reserved words that cannot be used as identifiers. In total there are 57 keywords in Java. One among them is Static.

The static keyword in Java is used mainly for memory management. It is used with variables, methods, blocks and nested classes. It is a keyword that is used to share the same variable or method of a given class. This is used for a constant variable or a method that is the same for every instance of a class. The main method of a class is generally labeled static. Lets start with static keyword in Java. 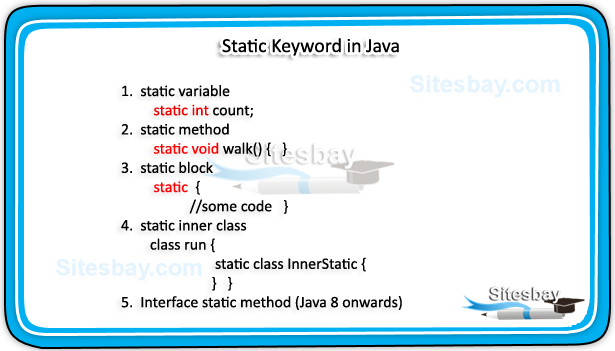 Here we cover these Topics

In java language static keyword can be used for following

If any variable we declared as static is known as static variable.

When and why we use static variable

Difference between static and final keyword

Note: As for as real-time statement there concern every final variable should be declared the static but there is no compulsion that every static variable declared as final.

In the below example College_Name is always same, and it is declared as static.

In the above example College_Name variable is commonly sharable by both S1 and S2 objects. 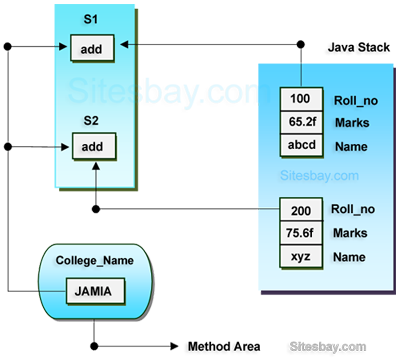 In the above image, the static data variable is stored in the method area and a non-static variable is a store in java stack. Read more about this in JVM Architecture chapter

Because the object is not required to call static method if main() is non-static method, then JVM creates an object first then calls main() method due to that face the problem of extra memory allocation.

Example of Static and non-Static Method

Read more about these things in separate