Number system is one of the fundamental topics in the quantitative aptitude section of any Exam.

In Decimal number system, there are ten symbols namely 0,1,2,3,4,5,6,7,8 and 9 called digits. A number is denoted by group of these digits called as numerals. 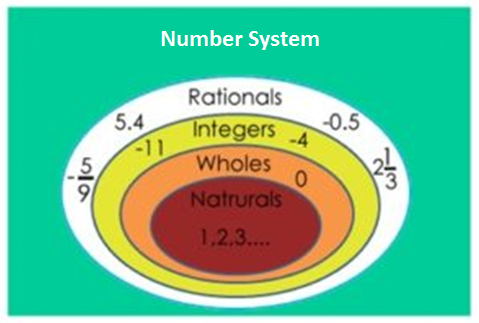 Composite Numbers: Numbers other than one which are not prime are termed as Composite numbers. Example 4, 6, 8, 9, 12

Real Numbers: Real number consists of both rational as well as irrational numbers.

Prime Numbers: Numbers which is divisible by themselves only apart from 1.

Composite Numbers: Non-prime numbers > 1. For example, 4,6,8,9 etc. 1 is neither a prime number nor a composite number. 2 is the only even prime number.

Rational Numbers: Any number which is a positive or negative integer or fraction, or zero is called a rational number. A rational number is one which can be expressed in the following format (a/b) , where b ≠ 0 and a & b are positive or negative integers. Irrational Numbers: An infinite non-recurring decimal number is known as an irrational number. These numbers cannot be expressed in the form of a proper fraction a/b where b ≠ 0. e.g.√2 , √5 , Π, etc.

Prime Numbers: Those numbers, which are divisible only by themselves and 1, are called prime numbers. In other words, a number, which has only two factors, 1 and itself, is called a prime number. e.g. 2, 3, 5, 7, etc.

Note: 2 is the only even prime number.

Note: 1 is neither a composite number nor a prime number.