Generation in computer terminology is a change in technology a computer is/was being used. Initially, the generation term was used to distinguish between varying hardware technologies. 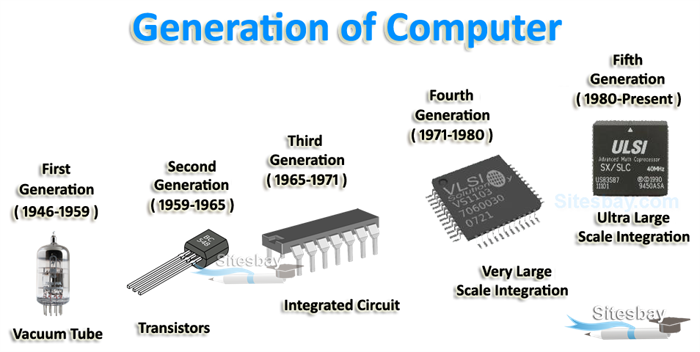 As the time passed, the device of more suitable and reliable machine was need which could perform our work more quickly. During this time, in the year 1946, the first successful electronic computer called ENIAC was developed and it was the starting point of the current generation of computer

ENIAC was the world first successful electronic computer which was develops by the two scientists namely J. P. Eckert and J. W. Mauchy. It was the beginning of first generation computer. The full form of ENIAC is 'Electronic Numeric Integrated And Calculator' ENIAC was a very huge and big computer and its weight was 30 tones. It could store only limited or small amount of information. Initially in the first generation computer the concept of vacuum tubes was used. A vacuum tube was such an electronic component which had very less work efficiency and so it could not work properly and it required a large cooling system.

The third generation computers were invented in the year 1964. In this generation of computer, IC (Integrated circuits) was used as the electronic component for computers. The development of IC gave birth to a new field of microelectronics. The main advantage of IC is not only its small size but its superior performance and reliability than the previous circuits. It was first developed by T.S Kilby. This generation of computer has huge storage capacity and higher calculating speed.

The period of fourth generation : 1972-1990. VLSI microprocessor based.

This is the generation where we are working today. The computers which we see around us belong to the fourth generation computers. 'Micro processor' is the main concept behind this generation of computer.

A microprocessor is a single chip (L.S.I circuit), which is used in a computer for any arithmetical or logical functions to be performed in any program. The honaur of developing microprocessor goes to Ted Hoff of U.S.A. He developed first micro-processor, the Intel 4004, as he was working for Intel Corporation, U.S.A with the use of microprocessor in the fourth generation computers, the size of computer become very fast and efficient.

It is evident that the next generation of computer i.e. fifth generation will be developed soon. In that generation, computer will possess artificial intelligence and it would be able to take self decisions like a human being.

The period of fifth generation : 1990-onwards.ULSI microprocessor based.

Fifth generation computing devices, based on artificial intelligence, are still in development, though there are some applications, such as voice recognition, that are being used today. The use of parallel processing and superconductors is helping to make artificial intelligence a reality. Quantum computation and molecular and nanotechnology will radically change the face of computers in years to come. The goal of fifth-generation computing is to develop devices that respond to natural language input and are capable of learning and self-organization.

Characteristics of Fifth Generation of Computers (the present and the future)